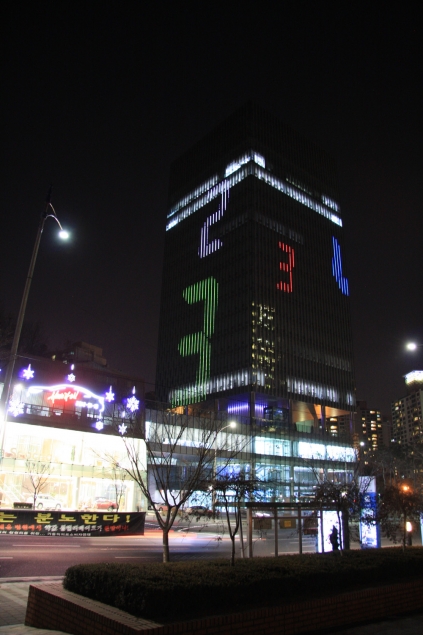 This work is a video project using a screen of an entire building that is symbolic of a new area of Seoul, which is made up of LED dots embedded in the front of a commercial building.

There are hospitals and the National Library and other facilities nearby, so the Seoul Metropolitan Government's landscape committee reviewed the project to make sure it was bright and well lit.

This project took a lot of time to complete. The concept is based on the already announced PC and projection work Floating Time structure, but the counting speed and the way of movement of the numbers are designed to fluctuate day by day, taking in external information from the Internet that changes every minute. The counting speed of the five numbers is determined based on the stock indices of renewable energy companies and nuclear energy companies. The speed of movement of the five numbers is determined by the wind and weather conditions in Seoul. In other words, the overall harmony of the work changes from time to time and the same movement is never repeated.

Therefore, this work provides an opportunity for viewers to think about the "energy problems of the global environment" and the "nature of Seoul today" by confronting them. In other words, this work addresses two of the fundamental issues of the 21st century: market fundamentalism and energy issues at the same time, using the technologies of LEDs, computer technology, and video technology, while at the same time incorporating a "reverence for nature.”

The subtitle "Blowin' in the Wind" is an anti-war song sung by Bob Dylan. Miyajima was inspired by the lyric, "Ask the wind for the answer."