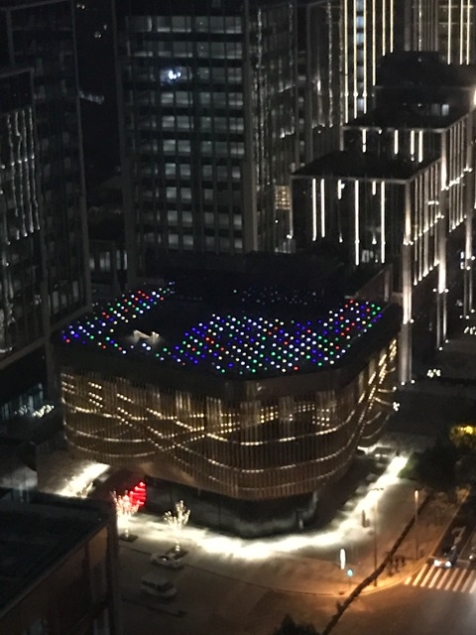 Miyajima embed 300 numbered LEDs on the roof of the new Shanghai Art and Culture Center.

Each LED ticks these numbers, counting down from 9 to 1 at a different speed, and then displays void as "0". It is a system that counts from 9, changes colors, and repeats the count from 9 again and again after a short period of darkness. This display is an original artwork that represents the "life" of a person in Buddhist philosophy.

In Buddhist philosophy, it is said that we can be reborn again and again in different forms. Hence, Miyajima has created a cycle from 9 to 1. The changing numbers are represented as "life" and the darkness of zero is represented as "death", and the repetition of these numbers is a way of expressing the eternal. It represents a distant "view of life."

Then, the numbers are set up so that the color changes when the numbers become dark and "death" and the next "life" begins. This is a representation of reincarnation in colors. There are five colors, red, green, white, yellow and blue. This represents what is known in Buddhism as the "five great colors". They are the five elements that produce all things, so to speak. They represent fire, earth, sky, wind, and water, respectively. Furthermore, the order in which these colors change is a function of their relationship to the other counters. It can change suddenly in a relationship. It is unpredictable. Because what is referred to in Buddhism as "reincarnation" is.

It's not a systematic change, but rather it is influenced by the environment and relationships with other people. The reason for this is that it is said to be a good idea.

Now, in this project, the counting speeds of the 300 LEDs with such a system is what Miyajima plans to have set up by 300 people from different countries and regions living in Shanghai. The number 300 represents the whole world and the whole universe at all levels. For example, in Buddhist philosophy, the number three and the number is used as "three worlds," "three views," "three times," "three worlds," "three worlds," and so on, to describe all kinds of worlds in three different ways a number to be divided into species and understood. And 100 is all the "Hundred Realms", "Hundred Discourses", "Hundred Fortunes", "Hundred Laws", etc. And a number that refers to enough, etc. So the number 300 means "all the world on every level”. In other words, in this project, "300 lives, all the lives of the world" are gathered in the Garden.

They communicate with each other, letting their individuality shine through and developing the communication of life. It's a whole and it is "a universe that plays a symphony of life." And that's exactly what it is.