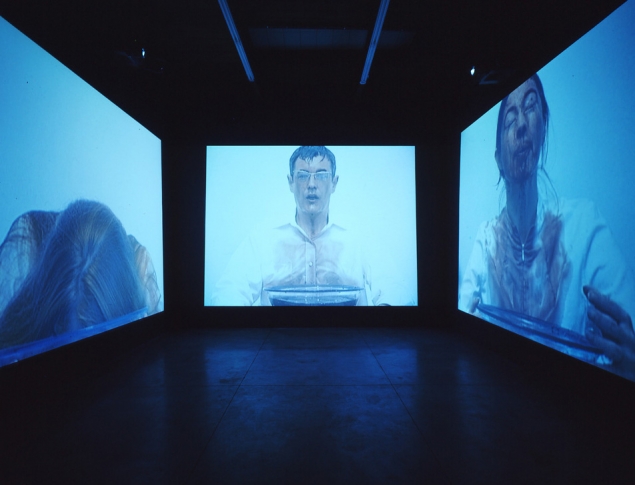 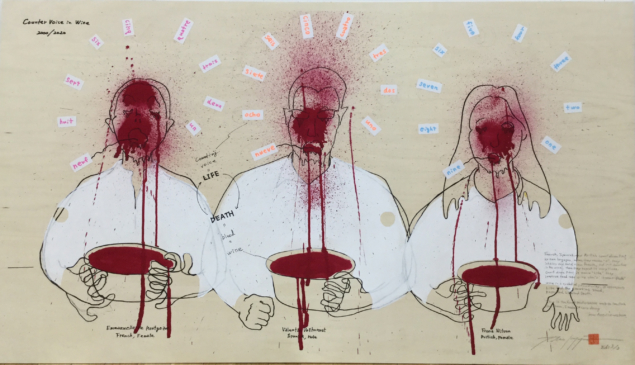 A shirt of performer ”Fiona Wilson” for Counter Voice in Wine


The film was presented in New York as a video piece of the performance.

The performers are an English lady, a Spanish man and a French lady. In the video installation, a Spanish is shown in the front, wearing a white shirt with his upper body in front of him. And on the left and right walls, a French and an English in similar white shirts are in the same composition. In front of them there is a clear bowl in front of them. At the beginning of the video, red wine is served in their bowls from both sides. Then, when the bowl is filled, they start counting down in their native tongue: 9,8,7,6,5,4,3,2,1... And when it's zero, they take a big breath and plunge their faces into the red wine. They hold their breath in the wine, and after a while they look up and repeat the countdown from nine again, not caring that the dripping red wine stains their white shirts. The speed of the countdown is done at their own discretion.

I chose three countries - the English, the Spanish and the French - because they discovered the Americas and created this country.
Wine is both "blood" and a symbol of rebirth. In other words, wine is a symbol of death and rebirth.