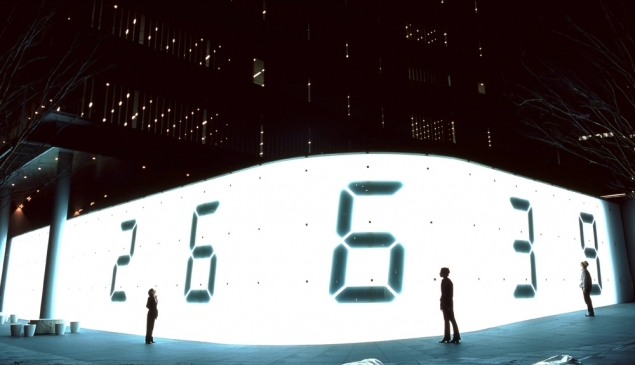 The artwork shows the contrast of 'Life' and 'Death', and a different face in the day or night as well.

Roppongi Hills offers a daytime show in Roppongi; the place which is filled with too much life, and the artwork will make it more. A TV station is the base, from which too much information is being broadcasted. The artwork will paint over the TV station with 'too much light', displays 'life' and 'light' and offers an opportunity to think of 'Deeper Death'.

Roppongi is an area originally known for its entertaining aspect and filled with human desire at night much more than daytime. Miyajima dares to bring 'Death' to such time at night in Roppongi, and bring 'Darkness' to the center of mass media. The artwork will create a black hole of 'Death' and 'Darkness', and offers an opportunity to think of 'Deeper Life'.

Day and Night -The dynamism of the Scene-Roppongi and the artwork create the drama of 'Death' and 'Life'. It continues to change and completes with feelings and thoughts of people passing by.