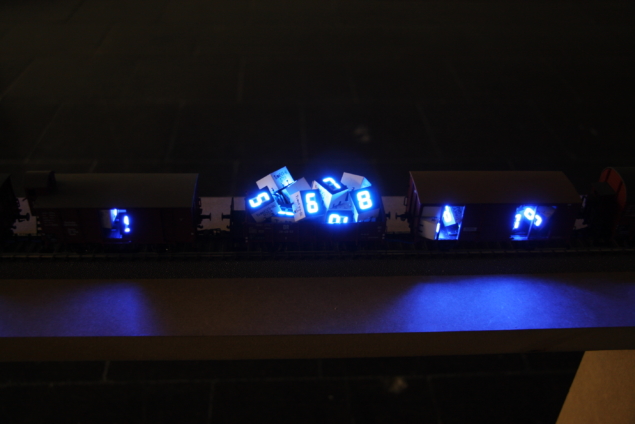 This work was presented at the Kunsthall in Ricklinghausen.
Ricklinghausen is a coal-mining town, and the railroad network that carries coal has been laid down in every direction. Coal has been an energy source for human development for a long time.

But we should not forget that the same coal was used to transport people to the Holocaust and then to Auschwitz, by train. From this town, too, Jews from all over Europe were confined in the train and transported like coal to Auschwitz. It was a long, long journey. It was a horrible journey to death. The blue LEDs represent the lives of the Jewish people. Crammed together, the LEDs sadly mark the time when they were still alive, the rhythm of life continuing into 9-1. And the train that carries it on continues to run night and day for what seems like an eternity.

I know that the words Holocaust and Auschwitz would give too much meaning and impression. But I dared to put them in the title. Because if Picasso hadn't titled his work Guernica, would we have thought about what happened in Guernica? As Susan Sontag has said, "Contemporary photography is defined by its title, the image is defined by its title. It can be good or bad, depending on the title (caption)".

No matter how you explain it as a metaphor, after fifty years, the only thing that remains of the work is the photographic image and its title. It is only through the title that we can find out what the artist intended to do with it.

That is why he chose to use a harsh word in the title. For the younger generation, as in Hiroshima, even the Holocaust has become an image of the distant past that they do not want to touch. But what happened because of human nature could happen again sooner or later. We need to pass this on to the younger generation. That is the responsibility of the adults of my generation, isn't it?