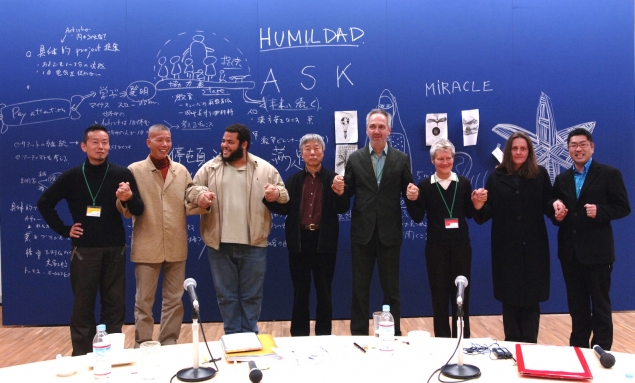 Tatsuo Miyajima organized an international conference of artists. Seven top visual artists were invited to discuss possible solutions to global concerns such as poverty, war and environmental destruction. The Artists Summit was held three times at Kyoto University of Art and Design. It was impossible to take place without deep understanding and cooperation of the University, especially that of Shochoku Tokuyama, the Chairman of the Board of Trustees. All participating artists also understood and consented to the concept of the Artists Summit, which was not to exhibit and explain their works of art, rather, to serve as a place for ‘dialogue for world peace.’

Its communiqué states: “Today artists find themselves in an unprecedented position of influence. However, artists sometimes find themselves involved in the competitive world of industry and unwittingly join those who amplify the problem, and thereby they neglect it. Artists need to adopt a more humble stance and while carefully reassessing their own work, should readopt a stance of responding to the demands of the age. Artists need to recognize ‘the other’ and accept ‘the external’. The practice of the artist is listening and observing. In making art, we also practice expressions of social issues and responsibility. We, the participating artists of the first Artists Summit Kyoto call for greater solidarity and for a continuation of this forum.”